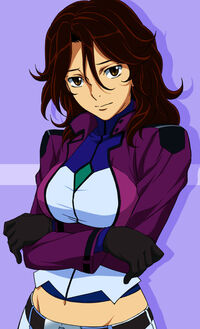 "I wonder if I ever had a reason in my battles..."

Formerly known as Leesa Kujo, a tactical forecaster for the EFA during the One Year War, Sumeragi Lee Noriega has since become a forecaster for the terrorist peacekeeping group known as Celestial Being. She devises mission tactics and strategies for their ongoing campaign of armed intervention, able to improvise nearly foolproof plans -- although she prefers the riskier ones. Despite being the respected commander of the Ptolemaios II, Noriega has a weakness for leisure, and a severe, sometimes crippling drinking problem.

The woman now called Sumeragi Lee Noriega was born "Leesa Kujo" -- Japanese on one side, Spanish on the other, and American on the map. From an early age, it became clear that she was a smart girl with a knack for lateral thinking and inventive plans, although at such a young age, these plans had little more practical application than devising the most efficient paper route through her neighborhood. Leesa's ambitions were vast, though; she was barely pubescent when she determined that her career path would take her toward being a tactical forecaster for the EFA. With her prodigious intelligence, she gained early admittance to university, where she studied alongside fellow brilliant young people such as Kathy Mannequin and Billy Katagiri. Through a military sponsorship program of some ill-defined sort, her university career also qualified as enlistment into the EFA, and at the tender age of 17, Leesa Kujo became the Federation's newest tactical forecaster, graduating a full five years ahead of schedule.

Young Ensign Kujo always had a plan, no matter the situation; and with regard to her work, her plan in being a tactical forecaster was to save as many lives as possible. She took her position just as the One Year War was flaring up, and so she had quite a lot to do as far as saving lives. Some of Leesa Kujo's schemes for strategic withdrawals -- minimizing loss of life when battles turned south -- and using unmanned units when circumventing or baffling enemy security measures to deliver a sneak attack became textbook maneuvers for the EFA, and with success, Leesa began to be a little overconfident in her abilities. After all, if you can just /effortlessly/ whip out this amazing plan off the top of your head after looking at the raw data for a minute or two... why shouldn't you believe your own hype?

And, you know, pride goeth, and all that. Leesa Kujo, caught up in her wunderkind status, finally made a mistake -- and a big one, at that. Working from bad information, Leesa did not think to cross-check it, and dispatched a strategy that resulted in an apocalyptic friendly-fire incident responsible for ending the lives of hundreds of EFA soldiers, including Leesa's lover, Emilio Ribisi. Overwhelmed by the cataclysmic mistake and stricken with inconsolable guilt, Leesa's work suffered until she finally resigned her commission and left the military. From there, she drifted from place to place, job to job, and bottle to bottle; the former tactical wunderkind couldn't bring herself to even formulate a plan about where she'd sleep from week to week. Alcohol dulled the sensation of loss.

Meanwhile, elsewhere: The long-simmering plans of the organization called Celestial Being began to take shape as thought began to complete the inexorable shift toward action. To do this, though, they would need an army; soldiers to fight war in the name of ending it. Disillusioned former soldiers seemed a natural pool to draw from, and thus investigation into possible tactical forecasters turned up the name "Leesa Kujo." Vetted and approved by the super-supercomputer Veda, Leesa was entreated to join Celestial Being's secret society -- and the notion of ending all wars was too powerful a bait for her to resist.

This was approximately two years before Celestial Being's public debut, and in that time, Leesa Kujo found that her mind for tactics was watertight, capable of functioning even while submerged under a sea of strong liquor and Irish coffee. She spent the two years not only rebuilding her tactical ability, but training with Celestial Being's other recruits to efficiently command the CB spaceship, the Ptolemaios, and to use the Gundam Meisters as key components of strategy. Finally, when her training was complete, the newly-rechristened Sumeragi Lee Noriega unveiled her plan: Twelve missions to resolve hotspots of armed conflict and, effectively, end all war.

Armed with a full complement of Gundam Meisters, the resources of the Ptolemaios, and enigmatic movers and shakers like Wang Liu Mei, the pressure is now reaching critical mass. Sumeragi Lee Noriega has a remit no less than "change the world." Now it's time to see if she's up to it.

Lately, though, she hasn't been.

Sumeragi Lee Noriega is a slightly complicated individual; the short form is "what if Misato Katsurugi's drinking problem stopped being hilarious," but there's more to it than that. She represents the insane level of innate potential that so many super robot warriors possess, but she also manages to show how deeply emotionally damaged war can make them. She is no longer much of a young woman, and as much as she presents the image of a relatively happy-go-lucky individual, she is intensely emotionally troubled, as would befit more or less every operative of Celestial Being. It is these perpetually-bleeding psychic wounds that drive her to do two things, though: one, to drink, and two, to end all war.

Sumeragi's mind guides her toward complex problems and then attempts to piece them apart and configure a linear path to their solutions. Have you seen 'A Beautiful Mind' -- remember the scene at the end, where we see the world from John Nash's point of view, and all these connections are just manifesting like beams of light in front of his eyes? Sumeragi's innate knack for problem solving works sort of like that, just without the CGI, the constant hallucinations, or looking /quite/ as much like Russel Crowe. Naturally, she is currently involved with the Sisyphean task of eliminating global (and post-global) armed conflict -- because of the brutal mess that even making waves would generate, her political views are probably best described as "quasi-anarchopacifist." She doesn't trust Earth's governments to act maturely; however, she acknowledges the necessity of government to regulate societies and as such strives to enforce their ability to play nice with each other, rather than abolish them. The saying about what it takes to make an omelet applies in full force here, though. Sumeragi has steeled herself against the weight of that knowledge. She is prepared to do what it takes to force humanity's hand, even if she may not completely know it yet.

Handling weight is something Sumeragi has trouble with in a variety of respects, though. For one, she is a stress eater, and when depressed can literally just sit there and eat a whole thing of candy beans. For another, when the going really gets tough, her first instinct is usually to withdraw; the trauma of her great bungle in the EFA is such that she would rather not even make an attempt than risk failure. Aligning herself with and becoming so vital to Celestial Being has removed the possibility of exit, though -- where it counts, in the scope of ending all war, she has no choice but to push further ahead. She is conscious of this, but it doesn't make her life any easier. When confronted with these heavy decisions that must be made, she forces herself to account for even the most minute details, even the most remote possibilities. In short, Sumeragi plans things to death; she attempts to think of every action and reaction that can be humanly predicted and branches her plans to an insane degree. The mental exhaustion of this labor is offset by abusing alcohol, to the extent that drinking is no longer a means by which she numbs her pain, but the "on" button that she requires in order to even function among her peers, let alone do such a taxing and stressful job.

This is not to say that Sumeragi is sloppy googly-eyes drunk 24/7. (Although as of this writing, she pretty much is; it's been a tough year.) Rather, it's more a constant buzz that keeps her relaxed and in control of the situation, and encourages snappy banter and a laid-back outlook. She's built up that much of a tolerance, and uses alcohol as that much of a crutch; drinking doesn't make her drunk so much as keeps her normal. Sumeragi, when buzzing, is relatively happy-go-lucky -- not much seems to visibly bother her, even when dealing with complicated tactical problems. She's always got a smart comeback, and she's always got a plan, but even then she doesn't seem to take things very seriously. She'll launch a mission to contribute to the end of all war, and contribute remote tactical advice while sunbathing in a 1970s Linda Lovelace swimsuit. Sumeragi, while doggy-paddling through one box-of-wine to the next, comes across as the most together person on the Ptolemaios, the person who's always able to keep things in perspective and view the big picture, while not letting the scope and horror of war contaminate her outlook. (That said, when the shit hits the fan, she's all business, no matter how drunk she is.)

The irony, of course, is that Sumeragi's hopelessly contaminated already, and when set free of the burden of her willful substance abuse, she's too traumatized to even function properly. A sober Sumeragi, at this stage of her dependency, will lay in bed, powerless, occasionally crying. She is not beyond repair, but no repairs have been effected; Sumeragi has put all of her hopes, for the world and for herself, on Celestial Being's mission succeeding. To better humanity, war must end, but Sumeragi also wants to use this quest to better herself. If war ends, no one else has to die as a result, and maybe she might start to forgive herself for the mistakes she's made. She's a tactical prodigy who thrives on pulling off schemes with the dimmest possible chances of success -- of course she has a plan for saving her own soul. 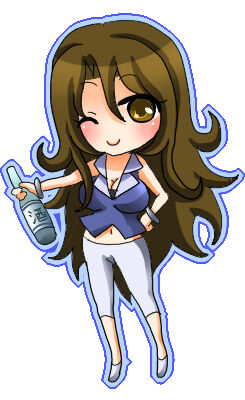 Sumeragi, Her Own Bad Self[]

Community content is available under CC-BY-SA unless otherwise noted.
Advertisement