Start a Wiki
The First Child 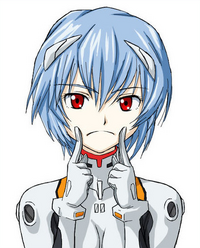 Rei Ayanami is a mysterious sixteen-year-old and the ward of NERV Commander Gendo Ikari. Little else about her is not classified. Loaned out to the A-LAWS team as heavy ordnance, Rei pilots the Evangelion Unit-00, an advanced prototype designed to combat extraterrestial / metaphysical threats known as 'Angels.' Though she seemed to come out of her shell somewhat in recent years, recently Rei has backslid into a much colder, introverted persona. Her poor social graces endear her to few, but she remains keenly intelligent and perceptive. Besides this apparent autism, her reputation is that of a pilot willing to sacrifice anything for the mission -- even her life.

Rei Ayanami was brought into the NERV fold at a prepubescent age by the program's director, Gendo Ikari. As she has grown, she has undergone rigorous scientific conditioning to enable her to synchronize effectively with the monstrous prototype for NERV's angel-killing technology, the Evangelion Unit-00. For undisclosed reasons, she requires near-constant biological maintenance, largely in the form of a carefully concocted pharmaceutical regimen; this may or may not have anything to do with her affirmed status as a vegetarian. In NCA 118, NERV began deploying her into Earth Federation Army conflicts as an apparent show of solidarity.

Nearly any information beyond this is intensely classified.

In September NCA 119, during an attack on the Angel Ramiel, Rei was grievously injured during the near-destruction of Evangelion Unit-00. After months of physical therapy, Rei returned to active duty in time to face off against Yazan Gable. Gable penetrated the entry plug of her Eva with his ship-breaking swords, an act which should have killed Rei -- but she somehow, mysteriously, survived. Loaned out to the new A-LAWS peacekeeping force as part of NERV's ongoing relationship with the Earth Federation, Rei continues to achieve Gendo Ikari's agenda despite her new station in space.

But then, that might be a dangerous assumption to make.

Rei Ayanami is a girl of few words. Even those who interact with her regularly are not granted the privilege of insight into her inner world. There is speculation, which NERV will neither confirm nor deny, that she suffers from some manner of low-grade autism. Likewise, there is talk, again neither confirmed nor denied, that she is actually some form of Coordinator.

Beyond her ability to pilot Evangelion Unit-00, it is not known -- or, at least, not available to the public -- whether or not Rei Ayanami possesses any particularly noteworthy talents or abilities. 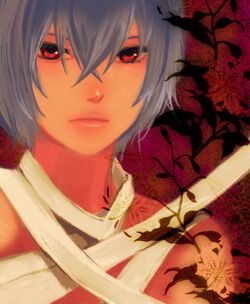 Retrieved from "https://srtmush.fandom.com/wiki/Rei_Ayanami?oldid=6016"
Community content is available under CC-BY-SA unless otherwise noted.