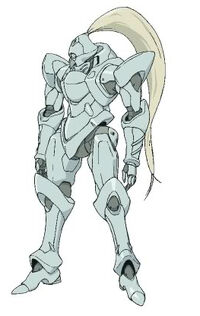 The Plan 1056 Codarl is a third generation ARM Slave designed by Leonard Testarossa and loosely based around the Zy-98 Shadow, an AS that - at the time of the Codarl's inception - was not supposed to exist. The Codarl is the first known ARM Slave to make use of the prototype "Lambda Driver System," a device capable of using a person's willpower to produce physical phenomenon capable of outright rejecting the laws of physics. While the Codarl's specifications are roughly on par with Mithril's M9 Gernsbacks, the Lambda Driver sets it wholly apart from other Third Generation ASes into a class of its own. Though powerful, the original Codarl suffered severe limitations due to its imperfect heat sink system and thus had a phenomenally low operation time while the Lambda Driver was in use before it overheated, a problem that has since been rectified in its successor unit, the Plan 1058 Codarl-i. Only one Codarl is known to have existed, operated by Amalgam operative "Mister Iron" -- better known as the notorious terrorist, Gauron.

It was all a lie.

Deal with it, sucker.

Retrieved from "https://srtmush.fandom.com/wiki/Plan_1056_Codarl?oldid=6110"
Community content is available under CC-BY-SA unless otherwise noted.