Start a Wiki
Earl of Pudding 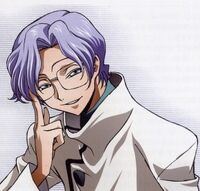 "I'm afraid I have some bad news! You survived."

Lloyd Asplund is a man with a massive intellect and absolutely no qualms about using it. A member of Britannian nobility, Lloyd has never been as well-mannered or proper as his fellows would like, but keeps his station as an earl through his bloodline and the fact that nobody particularly wants to get in his way. His noble title is more of a formality, though; his true calling is to scientific progress, and his achievements in Knightmare Frame research and development has led to forming and heading his own research organization, Camelot, as an irregular division of the Britannian military. Operating outside the rules and regulations of the Britannian armed forces has it's benefits, though, and Lloyd has grown used to the freedom it provides. Lloyd has a tendency to mock those around him, and immerses himself in science to keep from being reminded of the fragility of human life and relationships, and because of this, views other people as little more than tools or parts in a machine--which doesn't bode well for his still-enthusiastic assistant, Cecile Croomy, or his newest devicer, Suzaku Kururugi.

Lloyd Asplund is a noble of Britannia, hailing from the Britannian mainland, formerly known as North America. His life was largely unremarkable, by his own reckoning; he lived a life of priviledge and luxury, though it was not without it's trials. The Emperor of Britannia believed in the survival of the fittest, after all; thus, he decided he needed to be the fittest, in order to survive, for no reason other than the fact that he wished it.

Excelling at school was no shock to anyone. The prodigal son of nobles, Lloyd sped through the time spent at Britannia's finest educational institutions, and found himself bored regardless. He graduated at the top of his class every time, gained a doctorate years before anyone thought he would, and began his research because of a government grant not long after. Immediately after that, Lloyd determined that working under the auspices of the Britannian military was too restricting, and sought and received special dispensation from Second Prince Schneizel to operate outside the normal chain of command. This, by and large, left him to his own devices.

Fortunately, that ultimately paid off. The labor of years of research bore fruit in the form of the first Seventh Generation Knightmare Frame, the Lancelot, and all of the equipment that goes with it. The military was pleased, but hesitant; after the disappointment of the Sixth Generation, called the "Missing Generation" for it's lack of any real improvements to the Knightmare Frame, any innovation they had was good. Lloyd made sure they had plenty of that. He'd begun to start requesting permission to examine the mechs piloted by the Beowulves or the Shadow Mirrors when something rather unexpected occurred.

Which is about when Suzaku Kururugi fell into his care. The rest is, as they say, history; Lloyd stuck with the Eleven (or, rather, had the Eleven stuck with him) throughout the series of "little problems" they had with Zero, the Moonrace, and the Shadow Mirrors, always lurking behind him and making sure his baby, the Lancelot, isn't trashed. At the end, he was on the field with the rest of Britannia's forces; Camelot's field base, a trailer that doubles as a mobile lab and single-unit hangar, was parked near the command vehicle, and engulfed along with everyone else.

Now that he's in this strange world, he has a unique opportunity and a lot of work to do. Nothing has really changed for him, except the one who gives him funding and the fact that his title is largely meaningless. Maybe he can get his hands on one of those unique fighting machines...

Since birth, Lloyd's heart has been abandoned, coloring his experiences in the world. He's a sociopath, lacking the empathy necessary to relate strongly to other human beings. His behavior is strongly amoral, and, being that it is not something he controls, he really doesn't see anything wrong with it. He's an excellent mimic of normal human emotion, choosing to display a front of cheer while he calculates what it is he needs to do to progress with his work.

Even if he lacks the empathy to really relate with people, Lloyd can be surprisingly charismatic when the mood strikes him or he determines it to be required. His quirky attitude and lack of a real moral compass is covered up by his attractive appearance, feigned charm and his ability to adapt to a situation by determining how people expect to be reacted to and reacting as appropriate, to please them and lead them on.

Of course, that is often far more work than he's willing to put into something like "building a relationship with another human being." Lloyd believes that human emotions and relationships are the most fragile things about humanity, and that it is a weakness in them that he really has no desire to explore. While he doesn't mind having people who consider themselves his friends or, well, anything greater than an acquaintance, he doesn't actively seek them out unless he has something to gain from it or, more likely, wants to have some fun at their expense.

Lloyd mocks people. Lloyd mocks people a lot. He sees what he thinks is the inherent weakness in humanity and he will point and jeer until someone wakes up and realizes it's there. This is what keeps him irrepressibly cheerful or smug. He doesn't think he's better than everyone; he knows he's better, because he has spent so much time making himself that way. Some may be superior to him in individual ways--being stronger, or faster, or better at piloting a Knightmare Frame (which most people are)--but, overall, he counts himself the greater, lacking the weakness that ties to his fellows would give.

With even less people around to distract him from his projects, Lloyd immerses himself in his love of science and technology both to protect himself from the perils of humanity and because, to him, work and play are the same thing. He loves to work on Lancelot and it's attachments, he loves to expand his scientific knowledge and skill and then apply it to something new, and he loves to see his creations be used. What, after all, are they there for, if not to be used by someone? Without a proper devicer like Suzaku Kururugi, Lloyd would not be satisfied by his dear Lancelot. It's existence isn't enough; he has to see someone take one of his inventions and do something great with it, so he can point at it and say, "My name is Lloyd Asplund, and this is my creation." Only then will he feel absolutely certain satisfaction.

Only then will he feel that he can move on and do something even greater.

Retrieved from "https://srtmush.fandom.com/wiki/Lloyd_Asplund?oldid=7150"
Community content is available under CC-BY-SA unless otherwise noted.