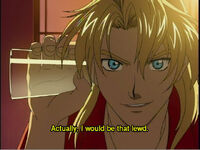 "If she had any clue what she was missing, she'd already be clawing her name in my back...!"

Mercenary, sniper, and full-time ladies' man, Kurz Weber is actually not a wholly shadowy face. Although he works for Mithril, an organization whose secrecy is only rivaled by its bizarre technological advancement, Kurz has been a model for TAG magazine - a popular publication for and about soldiers. Formerly a mercenary sniper in the Lebanese theater during the latter stages of the Fifth Middle East War, Kurz managed to get out of the fighting before the Aggressors swept through the region. Like so many veterans of the Fifth Middle East War, Kurz's military abilities are so advanced they border on the outright supernatural, and his skill places him easily among the top five snipers on the planet. But you wouldn't know it to look at him - most of the time, Kurz would much rather talk about his romantic conquests than his prowess with a rifle.

Kurz was born to West German parents in Tokyo, where he grew up while his father worked as a news correspondant. When his family was killed in an airport bombing, he left his comfortable life to become a mercenary in Lebanon, where he hoped to avenge his family fighting terrorists. It was there that he discovered his talent for marksmanship and arm slave piloting, as well as modeling for military and fashion magazines. He also earned the attention of Mithril, who scouted him for a position among their special forces. At their training academy, he met up with Sousuke Sagara, a fellow recruit, and Melissa Mao, their instructor. While he was initially loathe to show off his skills to such a secret organization, it was his sharpshooting during a hostage rescue that earned him Mao's respect and a position as a sergeant on the Uruz team.

Kurz is your stereotypical hyperactive and undersexed 19 year old college student. One who just happens to belong to an elite mercenary outfit instead of a fraternity. He certainly doesn't look much like a soldier with his persistent grin and long blonde hair, and he doesn't act like one either. For starters, he's a major lech, always hitting on the opposite sex - even his fellow soldiers. Kurz never misses an opportunity to hit on a pretty face - regardless of the situation - and he always bounces back for more. He thinks of himself as a major ladies' man, and he certainly looks and dresses like one, but his hormones occasionally get the better of him, and his common sense is usually nowhere to be found.

His lack of common sense is not just in effect around women, either. Kurz is almost as much of a social disaster as Sousuke, albeit in the opposite direction: Overdrinking, overacting, and generally overdoing everything. Gregarious and boisturous, its easy to pick him out of a crowd, as he's usually the loudest and most animated. Vulgar language is not beneath him, even to higher ups like the Sergeant Major. He's also not above pulling stunts on superior officers nor voicing his displeasure at orders he's not comfortable with. Another of his favorite activities is to tell vivid stories about his and Sousuke's exploits - security level permitting, of course. Kurz may no longer be a model, but he still lives for the feeling of having all eyes on him.

Amazingly enough, despite all that, Kurz is a very competent and even brilliant soldier. He takes his job seriously, as well as the risks and dangers it entails. He remains his loose and energetic self in the field, but never to the point of interfering with orders. His duty to Mithril and his squad comes first and foremost. Even in a moderately drunken state, Kurz can take his sniper's post without issue. He's certainly not as hardboiled as Sousuke, by any means.However, Kurz does fancy himself as a cinematic hero, a role he relishes above none other. That, along with his pain over losing his family, is what drives him to be the best soldier he can be, so that he can continue to play the 'hero' during his missions.

Indeed, Kurz - while lacking in social awareness - is no dummy, and he can be just as quick on his feet as Sousuke. As an NCO and as an elite soldier, he has missions and responsibilities far beyond those of a normal grunt. He's proven his mettle time and again, improvising new plans on the fly, surviving by his wits, and continously achieving what one might consider impossible. And he does it all with a wink and a smile, 'cause he knows he's just that damn good. He is the Hero, after all.

Kurz's ties are to his mates aboard the Tuatha de Danaan. Sergeant Major Mao is his "big sister" and Captain Testarossa is his "little sister". (Though he wouldn't mind at all if either of them jogged around the base naked.) He's not above laying the mack on the Sergeant Major either, even if she does give him grief over his lack of reports or calling her a b----. The relationships are playful for the most part, however, as they have each other's back as squadmates.

Sousuke is Kurz's brother in arms, even if they seem like complete opposites. They've known each other since the academy, and now serve in the same squad. They're Butch and Sundance, and almost ended their movie the same way Newman and Redford did too! No matter the situation, Kurz has complete faith in his squadmate doing the right thing, and rising above the circumstances. (Much like Kurz would if the roles were reversed.) When everyone else went 'WTF' when Sousuke opened the 40 oz can of Lambda Drive whoopass, it was Kurz alone who was smiling like a maniac. He knows there's something special aboutSousuke, and he wants to make sure to stay along for the ride. If he can't be the hero of this story, maybe he can get the best supporting role instead.

Officially, Kurz is a member of the Katharon by virtue of his membership in Mitrhil. Personally, Kurz takes his allegiance to Orb and Mithril very seriously as they both have similar goals in ending war and preserving justice throughout the world. He may be a happy-go-lucky guy, but he's never forgotten nor forgiven what's happened with his family. The best way he can save another boy from sharing his grief is by blasting bad guys with his M9, so onward he fights for truth justice and the Mithril way.

As a pilot, Kurz is far more patient and reserved than his personality would suggest. He's the squad sniper, armed with almost supernatural talent, which makes him the deadliest of the Uruz team when it comes to ranged combat. As the sniper he gets overwatch, picking and choosing his targets while keeping his squad mates out of trouble.

As a soldier of Mithril, he only gets the newest and latest goods, which currently is the M9 Gernsback. Equipped with an ECS stealth unit, the M9 can be rendered completely invisible, even to optical sensors. As a real robot, its a rather nimble - if small - unit, incapable of flight and space ops without major modifications.

The Gernsback can also be equipped with a variety of weapons, depending on the mission.Kurz's normal loadout replaces the normal autocannon with a 57mm smoothbarrel cannon that he uses to snipe at opposing forces from long range. He also keeps some anti-arm slave rockets handy, though he rarely uses the M9's anti-armor knife unless he's in deep close-range trouble.

Kurz is a legendary marksman: As the story goes, he can hit a coin at a kilometer's distance. He's the squad sniper, keeping to the rear to overwatch the unit through his rifle scope. He's not specialized in normal small arms operations or close combat, but as a special forces soldier, he's well trained and adaptable enough to keep up with the rest of the unit should the situation warrant it.

Retrieved from "https://srtmush.fandom.com/wiki/Kurz_Weber?oldid=7113"
Community content is available under CC-BY-SA unless otherwise noted.