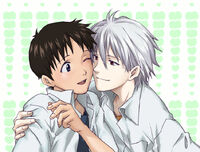 A mysterious young man piloting an even more mysterious Evangelion for the even MORE mysterious defense organization NERV, Kaworu Nagisa is a boy with no past and, like all Eva pilots, probably no future. Charming despite his intense demeanor, personable despite his detachment from matters of life and death, and explicitly more handsome than Leo Stenbuck, Kaworu always seems to know more than he lets on, especially regarding his mysterious connection to fellow pilot Shinji Ikari. He pilots Evangelion Unit-06, a massive unit built in secrecy, about which nearly nothing is known.

Kaworu Nagisa mysteriously appeared in the aftermath of the disappearance of Evangelion pilot Rei Ayanami.

Kaworu is enigmatic and detached. This largely stems from the fact that he is not a human being, and conscious of this fact. It's not that he doesn't care about the concerns and needs and wants and desires of humanity -- he takes a very keen interest in that sort of thing. But it's an interest, not an experience; it's the difference between watching a lot of Western movies and knowing their trivia and conventions inside and out, and actually being a cowboy from the Old West. Kaworu's separation from humanity leads to his priorities being different, though. Let's say you find a starving kitten. A human might take it in, nurture it, try to feed it, cling to the hope that the little guy can pull through. Kaworu would recognize the futility of its struggle and break the kitten's neck. Both are acts borne of kindness, but kindness coming from two entirely different places, and manifested in two entirely different ways.

Kaworu wants to understand us -- us, as in humanity. His reasons for doing so are unclear, probably even to him. Perhaps it's that he's confined to a human shell -- even Rei Ayanami, as a shard of Lilith, eventually caved to the need for human companionship and understanding. (Twice.) Still, Kaworu is willing to indulge this side of himself. It's done in his own inimitable way, though. He doesn't tailor his behavior to human social customs. He behaves as he is wont to behave. But when this elicits reactions -- and it usually does -- he seeks to understand WHY people are reaction. Why people do what they do. And he handles this task by approaching it in the most efficient and direct manner possible: he asks them. He grills them until they can't bear it anymore. He's an armchair psychoanalyst. Psychoanalysts seek to solve people's problems, though. Kaworu feels no such need, and no such responsibility.

Kaworu is especially drawn to the, shall we say, negative end of the emotional spectrum. He wants to understand pain and loneliness. This is unquestionably because at his core (ha ha, core), he is driven by the need to reunite with his creator. Kaworu is in the unique position of being a holy trinity unto himself -- the father, the son, and the human spirit. Kaworu contains the soul of Adam, but a soul cannot function unto itself. It needs to be made whole again or it can't survive. And that is why Kaworu, like all Eva pilots, suffers from a walking existential crisis -- a sort of perpetual background state of breakdown that causes erratic decisions, such as the decision made by Kaworu to get down to Terminal Dogma and reunite with his creator / self by any means necessary. He's willing to bide his time. But he's only so willing.

The thing is, though, Kaworu is not a supervillain. Though he wants to reunite with Adam -- that's all he wants. But Adam isn't where he thinks he is. After all that hard work, all that sacrifice... Kaworu isn't the type to lash out, take it out on the world, swear revenge, etc. At his core he's like a son who longs to be reunited with his family (who is also him). He's a half that wants to become whole. He's a broken being in search of meaning, love, and peace, in a world that is prepared to give him none of these things.

Which is why he relates so strongly to Shinji Ikari.

Kaworu's connection to Shinji is one of those mystical things that happen between two people. Kaworu is drawn to the Ikari boy. In Shinji, Kaworu sees the epitome of the emotions and human experiences that he can most relate to, and wishes to form a bond -- more than a bond -- with Shinji in order to understand himself. Being human -- and Kaworu is part human as long as he's a creature of human flesh -- is a foreign experience, and to a lonely being such as himself, companionship and understanding are necessary in order to function. As is acceptance. As is love.

Kaworu wants to understand people. Most people label him as only interested in Shinji Ikari, but that is false. His interest extends to the other vessel, Rei Ayanami. Through his cryptic comments she comes to understand the side of her that was kept as a secret for so long. After all, they are both the same.

Kaworu is a sleeper agent for the Angels, and a sleeper agent for SEELE. But ultimately, he cares about himself. His alliance with SEELE is one of convenience. His fellow Angels are dead or doomed. He has no loyalty but to himself. And it is himself he seeks -- the missing pieces, those which NERV is keeping from him. He is the angel of free will, after all.

Kaworu seems to know a lot more than he should, all the damn time. He is able to form an AT Field capable of blocking a giant prog knife and all particles of sound and light to the molecular level. He can levitate. He is capable of technopathy (hacking and disabling electronic devices). Any other abilities remain unclear.

Retrieved from "https://srtmush.fandom.com/wiki/Kaworu_Nagisa?oldid=8292"
Community content is available under CC-BY-SA unless otherwise noted.