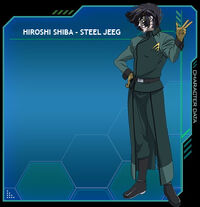 "I will defend this Earth from the demons of its past and the invaders of its future! BUILD UP, STEEL JEEG!”

Hiroshi Shiba is a hot-blooded race car driver. Hiroshi Shiba is a hot-blooded cyborg who turns into a super robot’s head. Hiroshi Shiba got stuck in a time warp for 50 years. Somehow, Hiroshi Shiba balances these three aspects of his life. Killed in a horrible lab accident, Hiroshi was rebuilt by his father into a cyborg capable of transforming into the head (and soul) of the modular magne-joint super
robot Steel Jeeg. When Professor Senjiro Shiba was beaten to death by agents of the evil Queen Himiko, Hiroshi swore revenge on the sprawling underground Yamatai Empire, who were gradually working their way to Earth from La Gias. 50 years ago, Steel Jeeg trapped Queen Himika-- and himself-- inside a giant time dilation bubble called The Zone, saving the Earth from devastation. More recently, The Zone was collapsed by Kenji Kusanagi, the new Steel Jeeg. In the name of preparing the world for Queen Himika's inevitable return, he joined the Divine Crusaders, but with the faction's shift of focus with the death of Bian Zoldark, he migrated to A-LAWS. Now, he continues his quest to force humanity to man up and drop a pair... before it’s too late.

Big In Japan (And Italy, and Latin America) race car driver Hiroshi Shiba was killed in an accident at his father's lab and rebuilt as a cyborg. His father was killed by Hikima, the top general of Queen Himika (yes, they just switched the last two syllables), and Hiroshi found he could transform into the head for his father's magnum opus: the super robot STEEL JEEG.

Hiroshi fights Queen Himika's subterranean Yamatai Empire and punches the rest of humanity's "Heroes" in the face until they toughen up enough to be ready for alien invasion.

Hiroshi sacrificed himself to contain Queen Himika, but Kenji Kusanagi ruined everything forever.

Retrieved from "https://srtmush.fandom.com/wiki/Hiroshi_Shiba?oldid=7139"
Community content is available under CC-BY-SA unless otherwise noted.