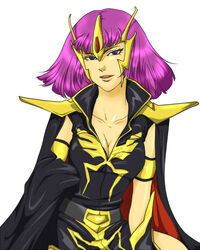 "The proof of our might will forever be etched in your minds."

Haman Karn is the cold and manipulative Regent of the militant Axis Zeon faction, one of the most powerful Newtypes alive, a mobile suit ace, and the self-appointed harbinger of the next stage of mankind's evolution, among other things. She seeks to destroy the reign of the EFA and replace it with her vision of a Newtype utopia. Having spent her youth being experimented on to study her Newtype power, her ego and lack of psychic defenses left her mind irretrievably warped by adulthood. Haman Karn possesses no compassion and no remorse, just the need to control the destiny of humanity -- by any means necessary.

Haman Karn was at one point in time the daughter of Admiral Maharaja Karn, leader of the Zeonic flight to the asteroid-city Axis at the end of the One Year War. As the child of Axis' leader, she had little to no boundaries established, and developed a terrific sense of entitlement; as a Newtype whose powers manifested themselves when she was still pre-pubescent, she was a subject of great scientific interest, and developed a terrible antipathy toward being a guinea pig. Her interests were elsewhere: inspired by tales of bravery and valor by the Zeon armies in the War, she wanted to be a mobile suit pilot, and because she was nine years old, she also wanted to marry Char Aznable and ride with him into the sunset on a unicorn. Around her terrible tweens, she pursued her interest in becoming a pilot above all else, and refused to allow Axis' scientists to experiment on her any longer. Because she was the daugher of Axis' leader, they didn't really have any choice but to back off, lest they find themselves the latest cases of "it's the darnedest thing, the guy just sleepwalked right up to the airlock button."

Though she readily plunged herself into mobile suit fighting via simulators and dummy-suit wargames -- all that Axis' seclusion had to offer -- Haman Karn was still a fundamentally lonely young woman. Painfully aware of her status -- both politically, given her parentage, and scientifically, given her brain powers -- she lacked anyone to confide in or even relate to. She spent most of her time living in an inner world, building up layers upon layers to keep the outside world from interfering. To anyone who looked, she appeared to be a carefree young woman, wearing short skirts in zero gravity and happily abusing the nepotistic effects of her ancestry. Only Natalie, the young Zeon officer appointed by Admiral Karn to be her friend, could see through this, but even she did not realize the depths of Haman's loneliness. Rather than reaching out to anyone, though, Haman turned further inward, deciding that the only person she'd ever need would be herself. Her ego, already burgeoning, increased about a hundredfold -- resulting in a cocky, obnoxious young mobile suit jock.

Haman eventually began allowing the Axis scientists to study her Newtype power again -- with the monitoring and subtle coaching of Natalie, she gained more of a grip, although in large part the damage had already been done, the seeds already planted. The beginning of the end of Haman's sanity came when Captain Char Aznable drifted to Axis, accompanying the last of the Zabi family -- the Lady Zena and her daughter, Mineva. Overwhelmed by the presence of her hero, the teenage Haman attempted to seduce him, only to be rebuffed. Heartbroken, Haman's Newtype powers left her easy pickings for an empathic attack -- which came in the form of the ailing Lady Zena's death. Haman uncontrollably looked into Zena's mind during her agonizing and sudden death, and found that the abyss did indeed gaze also. Haman Karn now knew the face of death, the despair of oblivion, and it changed her. She spent some time in the hospital, and sank into a deep depression, becoming careless, fatalistic, and mildly anorexic (as opposed to her previous healthy teenage bulimia). The death of Zena -- rejection at the hands of her idol -- she could no longer cope with life.

With some time and some coaxing from Natalie, however, Haman overcame her momentary obsession with mortality and even more all-powerful obsession with how she'd embarassed herself with Char. Life continued. Then, during the ceremony to crown infant Mineva Lao Zabi the successor to the Zabi throne, the Earth Federation Alliance launched a surprise attack on Axis. Most of Axis' soldiers were rookies with no actual combat experience beyond simulators; in a moment of passion, Haman incited them to fight, declaring that she would lead the charge herself (and immediately realizing she may have made a huge mistake). Nonetheless, she led the men out into battle, and quickly got in over her head -- overcome by the fear and frenzy of "REAL BATTLE" and going into a psychotic bit holocaust -- only to be saved by her hero, Char Aznable, who successfully led the Zeon forces to drive the EFA squads away.

However, the battle triggered the true decline of Haman's grip on reality. Her Newtype powers left her awash in death, having taken lives in battle -- and when she found herself defenseless and surrounded, she used these powers to call out to Char from a vast distance away, exerting herself so hard that her brain shut down. Adrift in her own subconscious, Haman was briefly comatose until she found the willpower to recollect herself. Though she eventually recovered, she was never the same. Life was no longer the game she wanted it to be, but this only intensified her desire to win it. A year later, her father died -- at the recommendation of "Captain Char" she took up his role, becoming the teenage Regent of Axis Zeon, leader of the secluded movement and protector of young Lady Mineva. Her charisma, bravery, and Newtype powers made her an effective if inexperienced leader, but the more she tasted power, the more she desired. This hardened her soul further, as did an ephemeral affair with Char Aznable himself -- his second rejection of her proved the final nail in her psychic coffin. Haman Karn the arrogant youth was dead -- long live Haman Karn, the monster of Zeon.

Since Char Aznable's disappearance into his undercover role as Quattro Bageena, Haman Karn has become the sole power player among the scattered nation of Zeon. Controlling the young Mineva Lao Zabi, she has also used her power to establish an alliance of convenience with Bian Zoldark's Divine Crusaders -- though her foremost concern is the reestablishment of Zeon as a galactic superpower, as a means of crushing the Earth Federation Alliance once and for all and forcing mankind into the stars -- to allow Newtypes to ascend to their proper place as the incoming master race.

Haman Karn, to the untrained eye, appears to be some sort of ice queen, an indifferent, distant individual whose lack of concern for her fellow living things borders on complete emotional apathy. To those who know better, the full picture is apparent: she is exactly that, and she is cruel and selfish besides. Haman is the center of her own universe, and no one could even hope to match the brightness of her star; anything she does is in the interest of not just self-preservation, but upwardly mobile powermongering. Haman Karn defines herself by how much she controls, and how much power she wields; because her ego is a force of nature akin to an F5 in its fury, she finds it necessary to wield quite a bit of power.

This is not to say that Haman Karn lacks emotion -- she still feels, and often feels very deeply, thanks to her supernatural Newtype ability. It's more that she buries these feelings, pushing them down where they can't interfere with more important matters. As such, her public persona is reserved and composed -- completely cold-blooded, if one uses the average "hot-blooded" teen-boy (or teen-boy-at-heart) mobile suit pilot as a comparison. Haman saves displays of emotion for when it best suits what she wants to accomplish, which means that the emotion she most displays is abject, all-consuming greed, with annoyance and spite being distant runners-up.

Haman Karn is a desperately goal-oriented individual, which would be a good thing if she did not hinge this trait to all of the markings of an addict. Her M.O. is to mark a goal -- typically involving the enhancement of Zeon, the detriment of the EFA, or the brainmeat of Judau Ashta -- and once she has a plan in place, barrel toward the goalposts, cutting down anyone who might stand in her way. Haman is willing to do whatever it takes to remove these obstacles; she is not at all hesitant to resort to military action, and should that be a poor choice she'll settle for Machiavellian diplomacy or, if prospects are dim all around, perhaps even seduction (granted, Newtype brain-ray seduction, which is sort of a different animal). And then, once Haman has gotten what she wanted, she'll see the next goal on the horizon, bigger and grander and harder to get than the last -- the cycle repeats itself endlessly, because Haman can never possibly have enough.

This, of course, assumes that she succeeds. Given the formidable opposition to Zeon's will zur macht -- that is, everyone who is not in the Divine Crusaders, and probably some of the Divine Crusaders too -- she faces a near-Sisyphean struggle in attempting to achieve her dream of a Zeon-ruled (more importantly, Haman Karn-ruled) Newtype paradise. She takes her setbacks in stride, largely because they only fuel her desire to succeed -- and give her a means to express just how frighteningly vengeful she can be. To defeat Haman Karn is to make an enemy for life, because that obsessively goal-oriented mindset of hers will turn 'punishing you for daring to step to her' into a goal. She doesn't hold grudges forever, though; she figures the other person will eventually die before she does, so.

Such is the effect of Haman having a lack of control rubbed in her face. She reacts as poorly to these losing situations as one possibly can, even if she maintains a cool veneer outwardly. Losing is a sign that she was not able to manipulate the situation into a desirable outcome. It's no different from, say, having been dumped by Char Aznable -- again, her lack of control over him rubbed right into her face, which is why she hates him so fervently. It's not that she doesn't LIKE him -- it's that he rejected her, and there's no greater threat one can impose on Haman Karn's sense of authority than asserting one's own desire.

Understanding this is key to understanding how Haman Karn interacts with other living things. Any interest in them is purely in the interest of furthering her own ends. Her endless pursuit of Judau Ashta isn't borne of romance; she covets his Newtype power and wants to use it to advance her own strategies. Her guardianship of Mineva Lao Zabi isn't driven by any genuine love or care; Mineva is the tool through which Haman controls Zeon, and Haman maintains her as one might an antique Harley-Davidson.

Haman Karn has an asteroid nation, a small but loyal army, and a strategic alliance with one of the most powerful factions in the universe. It's not enough. She'll teach the world not to underestimate Zeon ever again -- for every blow that has been struck against them, she'll hit back harder, until the universe is crippled, waiting for a samaritan to help it pull itself back together.

Haman Karn wants to be that savior. To her mind, that is what altruism means.

Retrieved from "https://srtmush.fandom.com/wiki/Haman_Karn?oldid=8273"
Community content is available under CC-BY-SA unless otherwise noted.