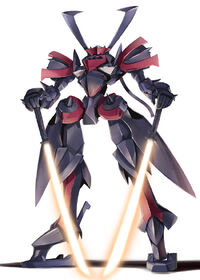 "Well then, focus your eyes upon this. Observe carefully... The secret technique of my Masurao, crafted by my true friend!"

The custom mobile suit of the A-LAWS ace known as 'Mister Bushido', the GNX-U02X Masurao is a marriage of 'conventional' USAF mobile suit technology and the newfound GN technology, designed by Billy Katagiri especially for the One Man Army's use. Exceptionally fast, the Masurao is a brutally powerful close-combat machine, and is the first mobile suit outside of Celestial Being to feature a revolutionary aspect of GN technology: Trans-Am.

After encountering the newest product of the GN line of Gundams, the incomplete GN-0000 00 Gundam, Mister Bushido decided that his current mobile suit was insufficient to the task of defeating the Gundam once it would be completed; thus, he turned to his friend Billy Katagiri, asking him to develop a new mobile suit that would be better able to serve his needs. The product of Bushido and Katagiri's hunger for revenge against Celestial Being was the GNX-U02X Masurao, built using all of Katagiri's understanding of GN technology, as well as notes from his old teacher, Professor Aifman; further, the basis of the Masurao's frame were the parts of the remaining Flags of the OverFlags Squadron, the USAF unit who perished against Celestial Being and their allies.

Once completed, the suit was turned over to Mister Bushido, and has since seen action on numerous occasions, defeating varied foes.

The Masurao takes advantage of all of the knowledge of GN drives and related technologies currently available to Billy Katagiri's mobile suit development team, from practical observation of the GN Tau drives and from Professor Aifman's notes during the original Celestial Being investigations. Like the Alvaaron and, they believe, the 00 Gundam, the Masurao uses multiple GN Drive Taus to match its power concerns; in this case, the mobile suit uses two drives simultaneously, though it lacks the abilities of a Twin Drive system.

Most alarmingly, the Masurao is capable of using Trans-Am, an ability previously the sole province of those granted a True Solar Furnace. With Trans-Am, the Masurao is able to perform well above spec, seeing massive increases in speed, maneuverability and damage output. However, because it is equipped with 'false' solar furnaces, Masurao's Trans-Am time limit is fairly low, and Trans-Am has an adverse effect on the drives themselves, often rendering one or both completely useless afterwards. This can make the Masurao's Trans-Am feature prohibitively expensive, and as such Mister Bushido has been asked to limit his use of it.

It's also important to note that the Masurao's inertial compensation system is not sufficient to fully compensate for the tidal forces exerted on the pilot in Trans-Am; the extreme speeds and hairpin maneuvering capable in this mode can cause extreme stresses on the human body, the damage only aggravating as a Trans-Am level battle proceeds.

The Masurao's weapon systems are fairly straightforward: It mounts a pair of 30mm GN Vulcan cannons in its head, for close-in defense and distraction, as well as a pair of GN beam katanas. The primary blade, named after Bushido's fallen wingman, Darryl Dodge, is usually found in the suit's left hand and is overpowered; running at about 150% spec for a beam blade, 'Darryl' is about half again as long to boot. The second blade, named after the similarly deceased Howard Mason, is of standard length and output; 'Howard' is traditionally wielded in Masurao's right hand.

Retrieved from "https://srtmush.fandom.com/wiki/GNX-U02X_Masurao?oldid=5715"
Community content is available under CC-BY-SA unless otherwise noted.