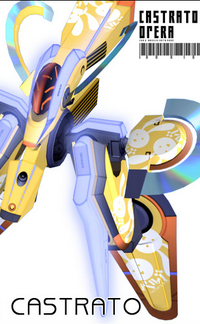 The Castrato is an experimental Hi-Rounder created by the Goddiver research team OPERA for Ernula's use.

OPERA designed Castrato with disposable android pilots in mind. When Goddiver was forced to shut down its peripheral programs, including OPERA, the order went out to the three prototypes that they must return for disposal. Ernula, piloting the Castrato, rejected the order and took the Hi-Rounder with her when she left.

It has since been destroyed repeatedly, but she always manages to rebuild it almost as quickly as she rebuilds herself.

Due to its high firepower and its skilled pilot, the Castrato is rated a Class A threat by the Special Space Service and standing orders are to engage it and stall for backup. The Goddiver Security Organization, however, rates the Castrato a class S threat and should only be engaged by teams of two or more.

Does not possess an ejection system.

The Castrato's maneuverability is lower than most Rounders, but it makes up for this with a heavy armament and significantly heavier armor. Its greatest strength is its pilot, who is not afraid to take risks that others would consider suicidal, and is capable of pulling maneuvers that would pulverize a human pilot.

Choir Cannon - Low-power energy cannon. Rapid fire, shotgun spread. Used often, but not very dangerous in most situations. It is usually used to make avoiding the other weapons more difficult.

Arpeggio Rockets - Low-power, high speed explosive projectiles. Often fired together with the Choir Cannon, in what is termed the Duet Shot.

Ensemble Laser - Primary weapon. Focused, high-energy laser. Can be fired in a variety of angles off the main body. The Ensemble Laser is a heavy piercing weapon capable of bypassing even heavy armor near-instantly. It should be avoided at all costs, or it will inflict considerable internal damage wherever it hits.

Option Unit "Consonance" - Deployable mirror blades. Intended to be used as a remote cutting weapon. Ernula has since repurposed them into mirrors for reflecting the Ensemble Laser's beam around corners or over obstacles.

The B.O.S.S., Curtain Call, boasts incredible firepower but very poor mobility. Its armor is nearly impenetrable. However, by donning the Curtain Call shell, its weakpoint becomes exposed near the center of the main body. The trick is getting an accurate shot off without getting shredded by its massive weapons loadout.

While most Shells are on even ground with a heavy cruiser, on average, Curtain Call's armament is equivilent to a small battleship.

Retrieved from "https://srtmush.fandom.com/wiki/Castrato?oldid=7498"
Community content is available under CC-BY-SA unless otherwise noted.