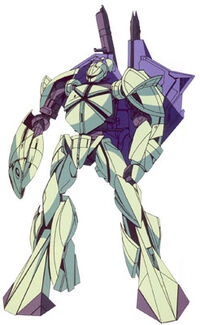 "Power. Power is everything. It's what you walk with in the daylight. It's what casts a shadow at sunset. It's why you lie awake at night. It's what scares the hell out of you. Power. It's what the Turn X is." -James Heller

Cagalli doesn't trust the Turn X not to have ten cockpits, each somehow containing Gym Ghingnham because of compressed space. She doesn't trust it not to just start flying around like some kind of horrible Gundam Fighter from Neo-Sleepy Hollow. She has no idea what it is capable of and as such assumes it is capable of everything that she can think of. -Cagalli Yula Athha

The CONCEPT-X 6-1-2 Turn X is a mobile suit of a class all it's own. It's true origin is unknown, but it's name is derived from a combination of the mysterious project that developed it (Project 6, Division 1, Section 2) and having a strange meaning: "The one who strayed (turned) from the path at the tenth (X = 10) planet/star." It might also have to do with the X-shaped "scar" on it's chest, left by the Turn A Gundam during their last, apocalyptic battle over the planet Earth, where it defeated Turn X and unleashed the Moonlight Butterfly that ended the Black History in a rather dramatic way. The machine may also have been made for interstellar travel by Newtypes outside the solar system that were present during the Black History, which somehow found it's way to Earth. The Earthnoids, expecting an invasion, then studied it to improve their technology and created Turn A.

Or so one story goes, anyway.

Gym is unaware of the significance of the name, but it hasn't stopped him from speculating. What he does know (or believes, anyway) is that Turn X was meant to be the successor of and a superior design to the Turn A. It's technological superiority to all other conventional mobile weapons in the Earth Sphere save a few rare exceptions is unmistakeable. Made up of nanomachines that may in fact be DG Cells or a derivative thereof, it is able to repair all forms of damage to itself with enough time, though imperfectly. While it used to be symmetrical, damage done to it time and again when it was in more active use and repeated regeneration means this is no longer the case, even though it is as functional as ever. Similarly, the large X-shaped "scar" in it's chest has been adapted by the nanomachines, since the damage was too great to repair at the time, making up for a potential weak point. The armor of the Turn X is composed of eltreum, and perhaps because of this, it enjoys immunity to conventional ammunition and high resistance to the most powerful of mobile suit-mounted solid projectile weaponry.

The innovations inside the Turn X do not stop at it's structure alone. It's power source is an ultracompact fusion reactor of a classified variety, an unknown model that provides it with an incredible amount of power uncharacteristic of it's size. Interestingly, it contains no moving parts that provide mobility in a conventional manner; instead, it moves through a series of variable I-fields, warped around it's body to provide incredible maneuverability and removing another possible target for enemy fire, as well as doubling as a method of deflecting enemy beam attacks. Though it uses a number of hand-held weapons, mounted on the remote-controllable Kyaraps weapon platform on it's back, it only possesses a hand actuator on it's left arm. It's right arm has been replaced from the elbow down with the weld-off/destruction manipulator, containing three beam emitters that can, through the power of shaped I-fields, be used as a powerful beam saber, a beam gun, or for the powerful "Shining Finger" technique.

Another feature that sets it even further apart from other mobile suits, widening the considerable gulf between the tier it resides on and that of other, lesser machines, is the inclusion of a highly advanced psycoframe. The psycoframe, miniaturized enough to be placed in a suit that is only 20.5 meters tall, is tuned to allow Newtypes the ability to control the Turn X mentally and without the use of the included hand controls (which are, of course, incredibly responsive regardless). The sensitivity of the psycoframe is such that it also allows non-Newtypes the ability to utilize bits and funnels through it, though talent or skill is still required to be effective with them, both of which Gym has in abundance.

Besides the manipulator on it's right arm, the Turn X has several other functions and devices that serve as weapons mounted throughout it's frame. It is capable of breaking into multiple pieces, with each of it's nine body parts (head, arms, legs, chest, back, hips, Kyaraps platform) operating as an individual component controlled by the pilot in a manner similar to modern bits or funnels. It's hand is sensitive enough to lift a human-scale bucket of water without spilling or crushing it, even while detached in this manner, and the nanomachines making up the mobile suit ensure that it is capable of reattaching regardless of damage done to it. These are not the only things that can be remotely controlled by it, either; in it's home dimension, it had the ability to control the Keilas Guilie-class attack satellite and similar weapons of immense power from the Turn X Top, and could theoretically do the same in this one.

Finally, the Turn X has several other functions that Gym has not yet utilized. First, it possesses the ability to teleport, much like the Turn A, though Gym does not understand the system enough to use it with any regularity. Second, the Kyaraps platform functions as some manner of interstellar drive as well as a mobile weapons platform. As Gym has no reason to actually travel outside the Solar System, he hasn't bothered to use it, though he's fairly certain it is either incomplete or currently damaged. Finally, and most notably, the Turn X has the ability to use the powerful Moonlight Butterfly (sometimes referred to as the "Wings of Fire" when produced by the Turn X), the weapon system that, at only 20% capacity, destroyed human civilization at the end of the Black History.

The Turn X possesses a plethora of weapons and systems that can destroy an opponent in all manner of dishearteningly efficient ways, as well as a few nastier tricks up it's terrible nanobot sleeve. The most obvious of these is the Kyaraps weapon platform on it's back, mounting a hand-held beam rifle of indeterminate but immense power similar to the Turn A's; a bazooka, also hand-carried when in use; and a three-barrel missile launcher. It has room for a much wider spread of weapons, but these were the only ones Gym Ghingnham was able to excavate before they took the Turn X and left with the Shadow-Mirrors, leaving it room to carry other weapons not meant for it, or to locate or develop more that are.

The destruction manipulator on it's right arm is a multi-function energy weapon, normally striking with a powerful beam saber generated by manipulating the I-Fields of the Turn X in a manner that contains and shapes the projected energy. It also functions as a beam rifle-esque weapon, firing in a manner and with power closer to a megaparticle cannon from the three beam emitters inside the somewhat claw-like manipulator. Two of it's functions Gym finds particularly interesting. The first, which does not involve the main weapon firing a beam at all, is the wire claws built into the manipulator. The three wire claws are just what they sound like: wires with small claws built into the end, specifically made to pierce enemy cockpits. More terrifyingly, the wire claws each possess a laser cannon in the tip, making it exceptionally deadly. The second function is the wide spread function of the manipulator, which allows Gym to grapple an enemy machine and then utterly destroy it in a manner just like Domon Kasshu's Erupting Burning Finger, disintegrating the whole of the enemy mech in one strike. Gym calls it the "Shining Finger," after an oddly similar technique he observed in the Black History's archives. Turn X may have parts from the (or "a") Shining Gundam integrated into it somewhere; after all, the machine of the Black History contains many secrets...

The Turn X also possesses an all-range attack system, able to seperate into nine different component pieces and attack with each one individually or all at once. Each of the nine pieces possesses a megaparticle cannon, and when combined into one unit, it is still able to attack with the two in the legs. In addition, when the Turn X's components surround an opponent, it can freeze it in place with a powerful magnetic field projected from the parts. When Gym opens fire with all nine cannons, rams an opponent, freezes them in place with the magnetic field and uses the beam cannons inside the manipulator to destroy them, he calls it the "Bloody Siege."

While the ability to freeze an enemy is impressive, more spectacular is the Turn X's capability of draining the power from an enemy machine. With an ability like this, even if the machine is somehow incapable of defeating something in a straight fight, it is more than likely going to be able to incapacitate it by simply sucking the power out of it for it's own uses. As if this wasn't enough, it also has the ability to drain energy from the enemy pilot! Gym isn't sure how that actually works, but he hasn't had time to fully investigate it, though he suspects it has something to do with the nanotechnology involved in Turn X's construction.

Finally, the Moonlight Butterfly is, of course, Turn X's ultimate weapon. At twenty percent power, it brought an end to human civilization on Earth. At full power, it is capable of wiping out everything it is calibrated to out to Jupiter. Normally, it simply breaks everything down, the device essentially devouring it is set to. It's power is absolutely immense, and Gym knows that he only needs to release a fraction of a percent to completely overwhelm an enemy mobile suit, and that he has so many other methods of doing so that releasing it's power is an option he really does not need to consider in any normal circumstances.

Retrieved from "https://srtmush.fandom.com/wiki/CONCEPT-X_6-1-2_Turn_X?oldid=7367"
Community content is available under CC-BY-SA unless otherwise noted.