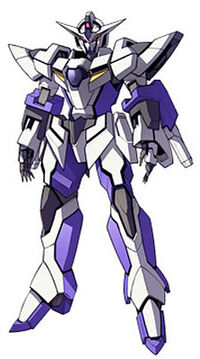 "Do you know why it is the 1 Gundam, Leo Stenbuck? Because it is a cherished machine -- beloved, because the one who pilots this will alter the very fate of humankind. And it was made just for you, Leo." - Ribbons Almark

One of two mobile suits created by Ribbons Almark as prototypes for what will eventually become the CB-0000G/C Reborns Gundam, the 1 Gundam (pronounced Ai Gundam, literally 'Beloved Gundam') is a direct successor to the GN-000 0 Gundam. Primarily a close- to mid-range unit, the 1 Gundam is designed to work in conjunction with the CBY-077 GN Cannon, its sister unit. Plans for a third unit to complete the set, the CBY-075 GN Tank, were scrapped before even the prototype stage. Currently, the 1 Gundam is piloted by Leo Stenbuck in his role as the leader of the GNX Team.

After the reclamation of the GN-000 0 Gundam by the EFA, Ribbons Almark commanded the creation of the 1 Gundam and its sister unit, the GN Cannon, as testbeds for cutting-edge GN-based technology. After their creation, Ribbons, in need of test pilots, turned to Leo Stenbuck and Louise Halevy, and presented them with the machines shortly after the formation of the elite task force A-LAWS.

Not only did this provide him with theoretically adequate guinea pigs for his new mobile suits, but it served to pull the two even further under his influence. The presentation of the two MS coincided with his declaration of what, under his guidance, they would become: the true next step in evolution... Innovators.

On top of its standard GN-Tau Drive, the 1 Gundam mounts two large GN Condensers on its elbows, a necessity thanks to the enormous power consumption of its GN Buster Rifle. Its GN Large Beam Sabers plug directly into these condensers, in lieu of a standard shoulder or inner-arm recharge rack.

The 1 Gundam is equipped with optical camouflage identical to that found on the third-generation Celestial Being Gundams. It rarely uses this capability, however; the system's enormous power drain takes a significant toll on the 1 Gundam's already strained power supplies, and unlike the CB Gundams, it lacks a true solar furnace to mitigate this drain.

Although extremely powerful, the 1 Gundam's weapons systems are not exactly fancy.

The one exception to this is its eight GN Fangs; as Leo Stenbuck is incapable of utilizing psycommu systems, in combat, the Gundam's Fangs are controlled by a Haro mounted in his cockpit. The lack of psycommu control also means the Fangs suffer from extremely limited range, thanks to the realities of Minovsky warfare. Beyond about a kilometer, the Fangs revert to preprogrammed attack patterns, in lieu of active control.

The picture above is, obviously, the 1 Gundam without its GN Shield or GN Buster Rifle; this is because, in its canon, the 1 Gundam did not actually mount these weapons, and the prototype versions it is equipped with were only assigned to it at the insistence of Leo Stenbuck. To see what the shield and rifle look like, just look at any picture of the CB-0000G/C Reborns Gundam.

Retrieved from "https://srtmush.fandom.com/wiki/CBY-001_1_Gundam?oldid=4205"
Community content is available under CC-BY-SA unless otherwise noted.